For the past three months, farmer James has been operating the prototype of our solar-powered charging station in his village in central Kenya. 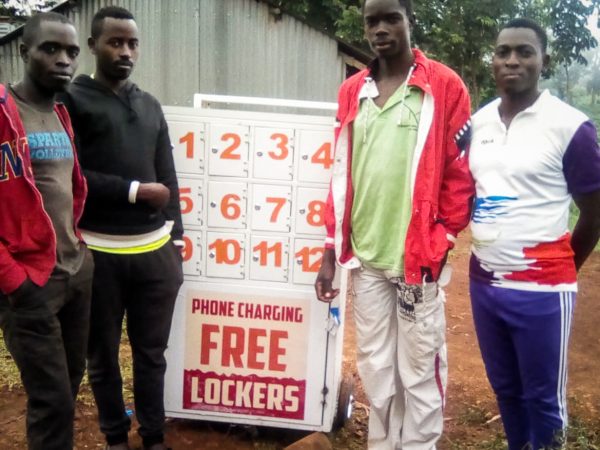 27-year old farmer James from Gwassi in western Kenya is the first paying customer to operate our charging station prototype. James heard about us through his uncle James (yes another James). Uncle James happened to pass our station during our first pilot in Nyamira and immediately got curious. He contacted our team and asked if the station could also be tested in Gwassi at farmer James’ house. Never underestimate the power of word of mouth!

Farmer James is the sole breadwinner for his family of seven. From the little money he earns from farming, he pays school fees, food and agricultural inputs. With our station, James wants to gain a sustainable income to support his family and raise their standard of living.

At the same time the station will benefit his community. At present, the people are struggling with reliable access to electricity. Many are not connected to the grid, and even those with grid access complain about regular power cuts, which forces them to recharge their telephone batteries in local charging shops. These stores often use fossil fuel generators and provide poor service to their customers.

After a month of operating the station in Gwassi, farmer James has received much positive feedback from his community. Many people, like Kevin, come by daily to charge their phone batteries. As Kevin tells in the video, they are happy that their phones are recharged much faster at our station than in the existing shops. Also, people are finally able to lock their phones while charging so that no more parts can get lost.

With our station, James can finally provide a better charging experience to his community members, improve his livelihoods and switch to clean and affordable solar energy. In just three months, he has already doubled his income and served 551 customers.

At the same time people are also learning about solar energy and its great benefits. Many have asked us about renting the station or buying other solar products. It’s a win-win!